Dblog is the interwebositry for all things creative, inspirational and elegant from D's world of art, design, cinema, T.V., comics, toys and pop culture. Drop me line or an interesting link any time... 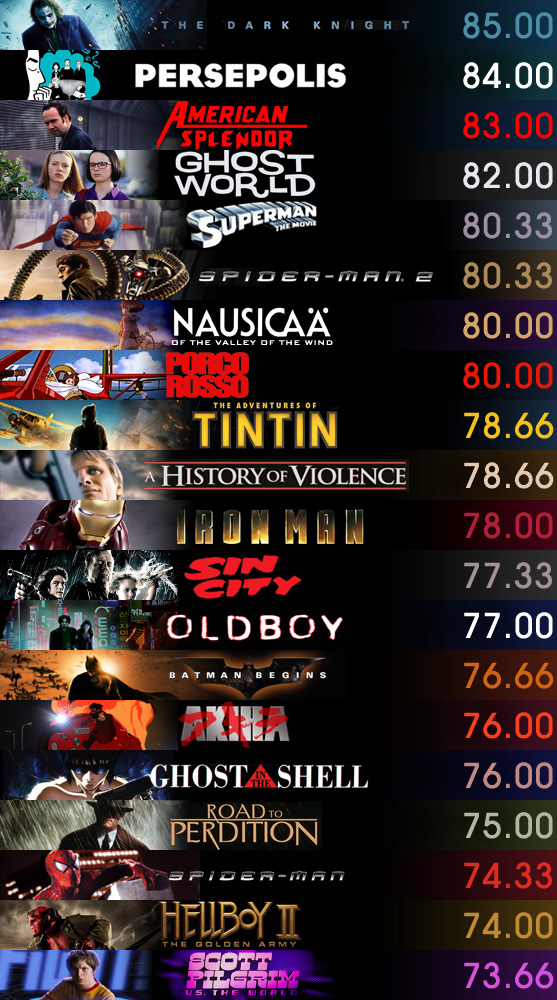 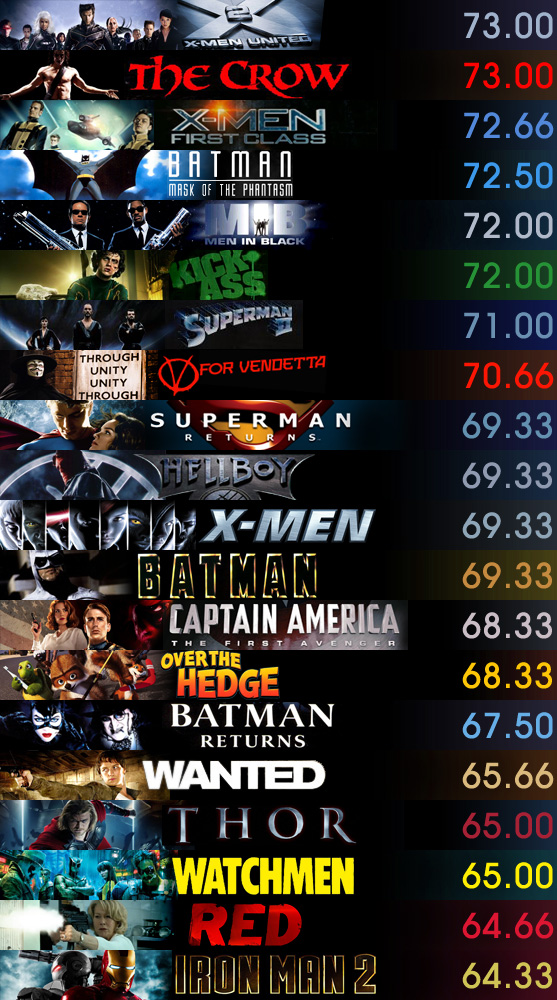 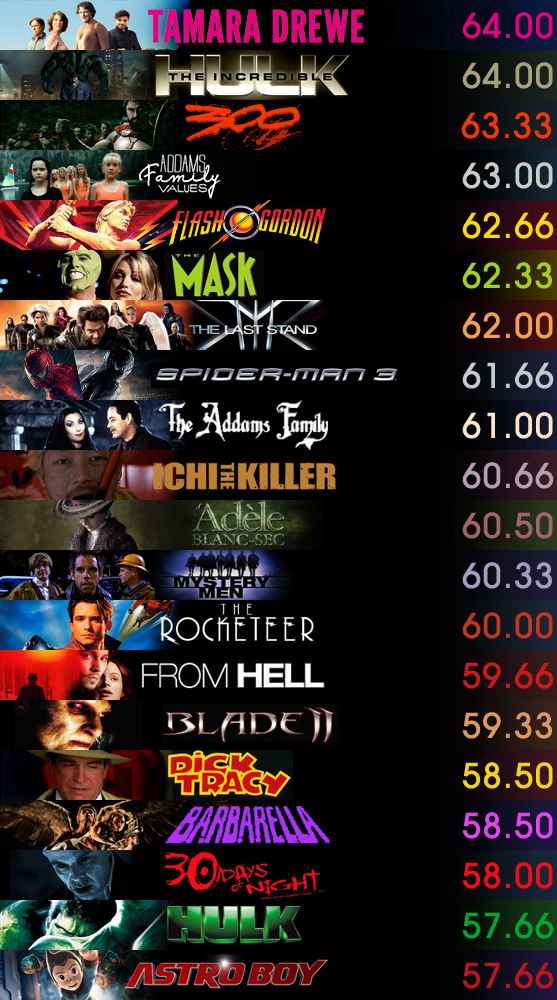 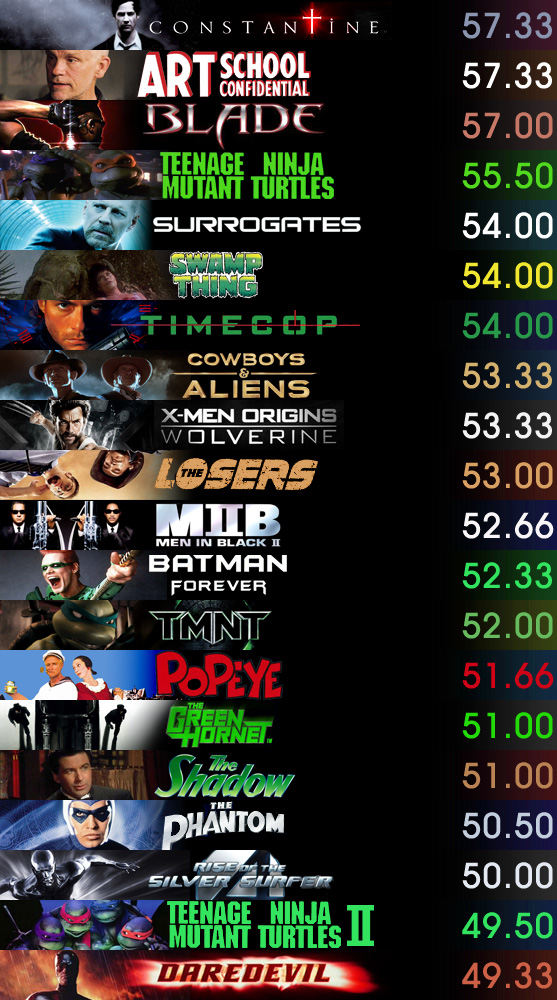 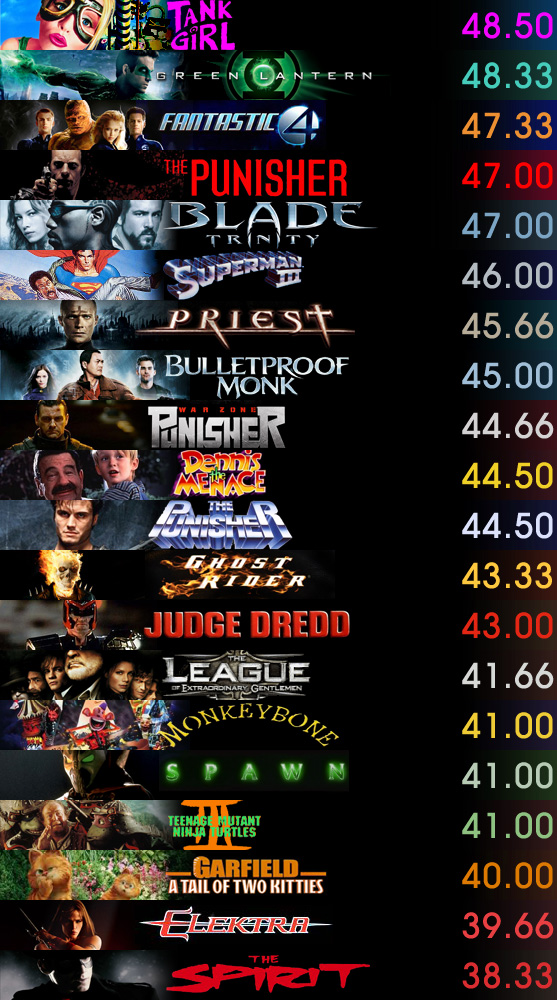 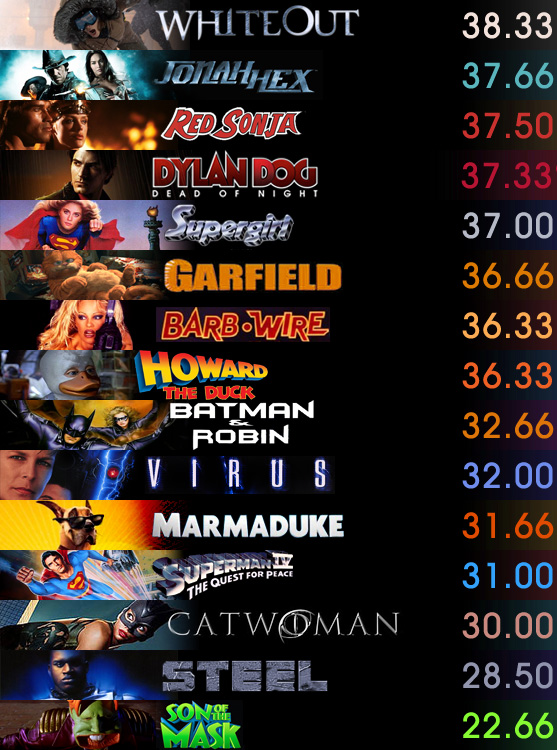 Hi comic fans... whew... I was really angry when I started writing this and using the word FUCK a lot... But as I started writing I realised that this is actually a pretty good list... A sound mathematicaly fair process to rank films based on comics on Dark Horizons

Leading up to Surrogates, it's pretty much the predictable faecal insult to comicdom I would expect (though I didn't mind the last two Punisher movies) and after that, it's pretty close to what I would say is an acceptable if slightly spotty chart... But this is MY BLOG as as I'm the only one reading it so I'm gonna share my 2 cents(with myself)... And  I do have a few issues...

*because you're an idiot

Survivors
It breaks my heart that this BBC series was cancelled after two seasons but this is a gripping remake of the 1970’s series of the same name. With high production values and a great authentic cast, this series follows a hapless group of disparate ‘everyday people’ who survive a virus that wipes out 90% of the population. Like a Zombie tale without zombies, our heroes must deal with many issues that we take for granted and the idea of having to rewrite the rule book on morality and society.

Turn it on.
0 comments

How To Last in a Tough Business Filled with Rejection.

A thoughtful article on How To Last in a Tough Business Filled with Rejection.

“A man of knowledge knows that his life will be over altogether too soon. He knows that he, as well as everybody else, is not going anywhere; he knows that nothing is more important than anything else. … Under these circumstances his only tie to his fellow men is his controlled folly. Thus a man of knowledge endeavors and sweats and puffs and, if one looks at him, he is just like any ordinary man, except that the folly of his life is under control. Nothing being more important than anything else, a man of knowledge chooses any act and acts it out as if it matters to him. His controlled folly makes him say that what he does matters and makes him act as if it did, and yet he knows that it doesn’t. So when he fulfills his acts, he retreats in peace and whether his acts were good or bad, or worked or didn’t, it is in no way part of his concern.”
0 comments

Can’t tell your Jack of Clubs form a 3 of Diamonds? Try Helveticards
0 comments

A concept by Phillips: The Urban Beehive
0 comments 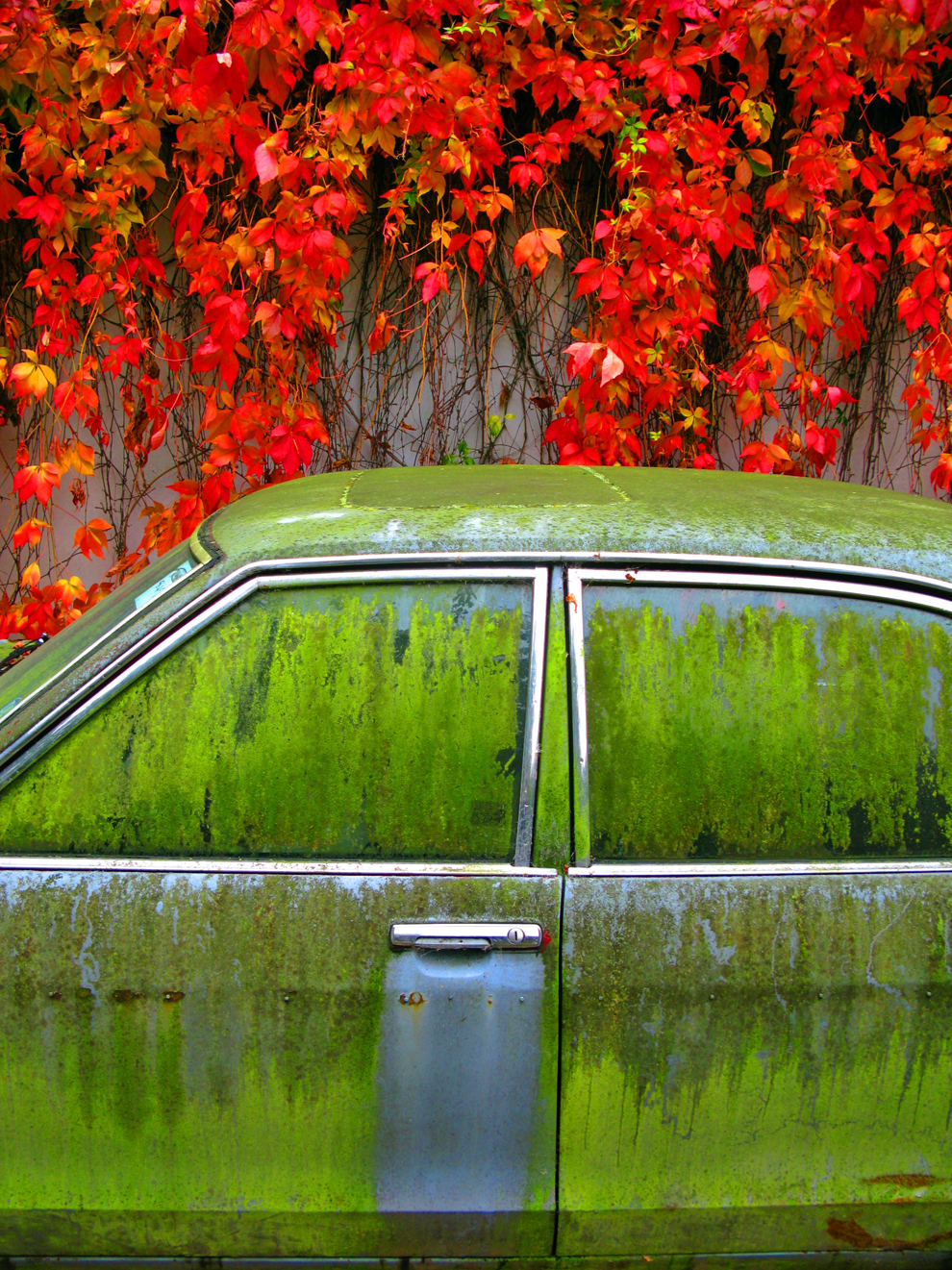 WOW!… This would have to be the ultimate resource for Movie opening titles: Movie Titles Stills Collection
0 comments

Movie Posters that never were… Movie posters that never were…
0 comments


A mesmerising Supercut of ‘God’s Eye View’ shots from the movies by Brian Carroll, set to a track by one of my favourite bands ever- A lot of fun!

Email ThisBlogThis!Share to TwitterShare to FacebookShare to Pinterest
Labels: Movie I was lucky enough to hear this Iranian Graphic Designer speak at AGIdeas, he truly is phenomenal talent: Reza Abedini….
0 comments

If like me, your pants have only just dried out since the first season of Game of Thrones, you might like to watch this strictly ‘teaserific’ behind the scenes video for Season 2- Ooops, I just had another accident…

For those of you not familiar with GOT (that’s what the cool kids all it) it is the, epic and surprisingly faithful small screen adaptation of George R. R. Martin’s book series, A Song of Ice and Fire which focus’ on politics over high adventure (in a good way) and any character is up for grabs… It CAN be pretty heavy going though, particularly the later novels. Check out the trailer or better yet, read the books.
0 comments

Finishing its fourth season and green lit for a fifth, SOA is a gritty, gripping series revolving around The Sons of Anarchy Motorcycle club in the fictional Californian town of Charming. Built on the foundation of a Hamletesque epic, the series charts their troubled control over the town and the criminal exploits they run out of it. It’s a great cast of characters and brilliant performances including  (Ron Pearlman, Katey Sagal and even Henry Rollins!) with some genuinely shocking moments throughout all 4 seasons (each a tight 13 episodes for those of you like us who have a lot of TV series to wade through). Now available on DVD. See the trailer.
0 comments 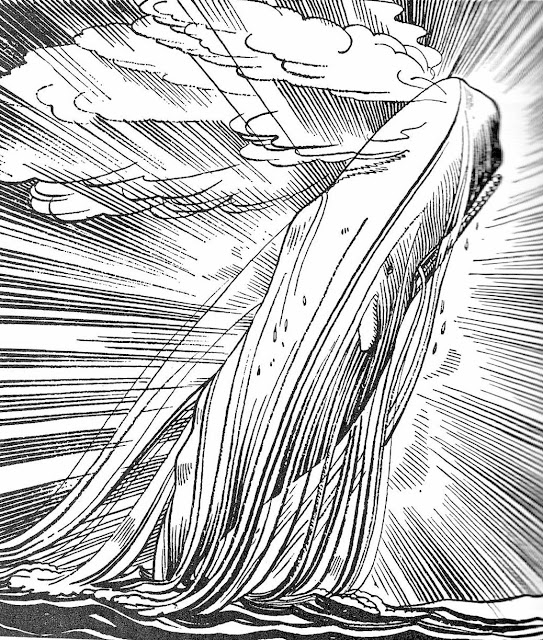 "Call me Ishmael. Some years ago -- never mind how long precisely -- having little or no money in my purse, and nothing particular to interest me on shore, I thought I would sail about a little and see the watery part of the world. It is a way I have of driving off the spleen, and regulating the circulation. Whenever I find myself growing grim about the mouth; whenever it is a damp, drizzly November in my soul; whenever I find myself involuntarily pausing before coffin warehouses, and bringing up the rear of every funeral I meet; and especially whenever my hypos get such an upper hand of me, that it requires a strong moral principle to prevent me from deliberately stepping into the street, and methodically knocking people's hats off -- then, I account it high time to get to sea as soon as I can. This is my substitute for pistol and ball. With a philosophical flourish Cato throws himself upon his sword; I quietly take to the ship. There is nothing surprising in this. If they but knew it, almost all men in their degree, some time or other, cherish very nearly the same feelings towards the ocean with me."

160 years ago, a promising young writers career came to an end when his treatise on life as a whaler was labelled by critics as a disaster; strange how it’s now a classic… Moby Dick celebrated its 160th year anniversary this week and  I would recommend you read it; though it’s kind of like the Star Trek movies, skip every second chapter which goes into the ‘science’ of Whales (no, every second Star Trek movie isn’t about whales, it’s just crap)… You can download it for free here
0 comments

There are many sites dedicated to BAD tattoos, but here’s one showcasing thoughtful ‘literary’ tattoos.
0 comments

This BLOG is the foundation for this nifty (and beautifully illustrated ) little book; Missed Connections  notes and messages for wayward, would be friends and lovers.
0 comments Just in time for Christmas, your very own Custom Carbonite!
0 comments

Thought I’d share a couple of great ads highlighted on the season finale of Gruen Planet.

A stunt by Carlsburg involving 148 bikers a movie theatre and a hapless couple.

And a legend of an Ad out of NZ finding the sweet spot between a serious message and humour for Drink Driving: Legend
0 comments

An article on ‘Why Kids can’t Search’
"We’re often told that young people tend to be the most tech-savvy among us. But just how savvy are they? A group of researchers led by College of Charleston business professor Bing Pan tried to find out. Specifically, Pan wanted to know how skillful young folks are at online search. His team gathered a group of college students and asked them to look up the answers to a handful of questions. Perhaps not surprisingly, the students generally relied on the web pages at the top of Google’s results list."
0 comments

Photography: Compression on the Tokyo Subway

A photographic study of compression, on the Tokyo subway by Michael Wolf.
0 comments

I posted a trailer for Drive a while back so I won't again but I dod see it this weekend- Fucking amazing! Thoughts of Old Boy, Ghost Dog and pretty much any Michael Mann movie. It was an intense, beutifuuly shot, actor's movie with genuinely shocking violnece. I god damn double loved it and here’s a great collection of ‘fan art’ and more…
0 comments Not the best way to view his work but in the same spirit as Olly Moss, Matt Ferguson has some inspired, simple poster art of classic movies.
0 comments

The Iron Lady Pixar’s latest, with a female in the lead… Brave
The Hunger Games which brings to mind one of my favourite movies, an early and perfect mocumentary which walks the line between dark humour and cutting insight perfectly, released at the height of COPS and Survivor... Series 7: The Contenders

Supercut: Anatomy of a Meme
And a couple of my favourite Supercuts:

the sopranos, uncensored. from victor solomon on Vimeo. 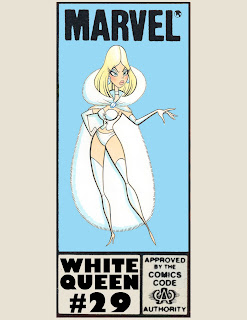 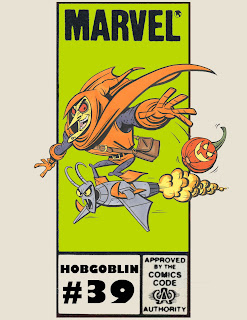 Part of a brilliant series by Illustrator Ben Balisteri’s of some of his favourite marvel characters.
0 comments 
Video of street artist Alexandre ‘Vhils’ Farto, carving and sculpting this mural into a wall… Not a short clip but definitely fantastic.
0 comments

Created by Japanese student Mayuko Kanazawa, a font made out of leg hair.
0 comments

Email ThisBlogThis!Share to TwitterShare to FacebookShare to Pinterest
Labels: Typography

Email ThisBlogThis!Share to TwitterShare to FacebookShare to Pinterest
Labels: Art

Ummmm, this kinda ISN’T safe for work (or at least it may get you some very odd looks from the boss and co-workers)…. I was up last Saturday night, one too many beers and one too many episodes of Star trek DS9 (YES- I am a party animal) when I flicked over to Rage (late night video clip show for our internationals here)… I honestly thought I’d dozed off and was dreaming. A pretty run of the mill track but one of those rare moments where you think ‘this can’t get any more wrong’ and it does, again and again and again. Duck Sauce’s Big Bad Wolf It really just has to be seen… though remember, it cannot be unseen…
0 comments

Email ThisBlogThis!Share to TwitterShare to FacebookShare to Pinterest
Labels: Music 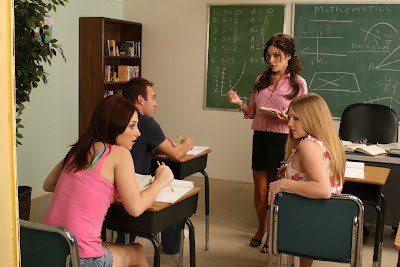 A brilliant site showing us the classic movie poster formulas and how few original posters there really are… Personally, when I worked at a video store, I always use to like lining up the Steven Segal movies in a row- Try that yourself one day…
0 comments

D
D is a creative, an illustrator and designer who accepts no substitutes for a good iced coffee.